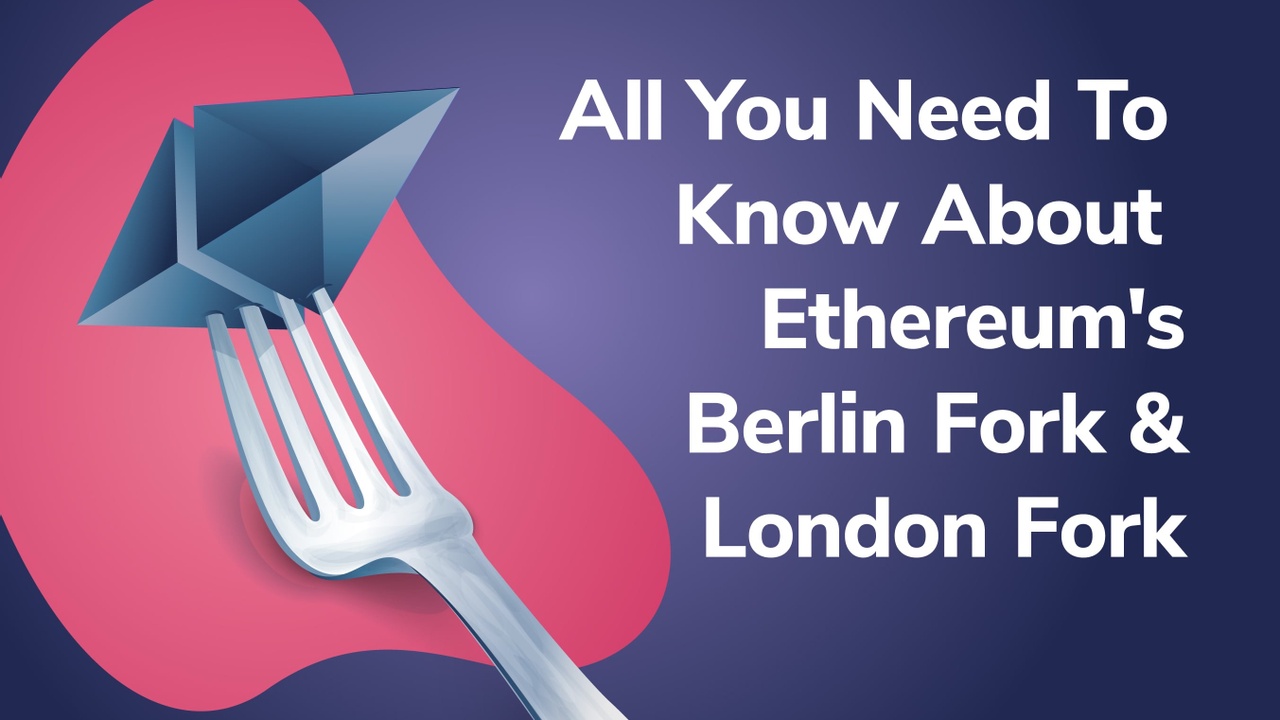 First of all, why do Ethereum network upgrades even matter? Well, those searching for the latest news on Ethereum or an Ethereum price prediction 2021 will likely have seen mentions of either Ethereum’s London fork or Ethereum’s Berlin fork, both scheduled for 2021. Although network upgrades like these are relatively technical, they can still be important for Ethereum fundamentals. So, what do the upcoming two Ethereum hard forks entail? In this article, we explain everything that’s packaged in the two forthcoming hard forks in an easily understood manner!

It has perhaps never been more important to keep an eye on the upcoming Ethereum network updates, with Ethereum recently reaching new all-time highs. Granted, Ethereum has not been the sole focus of the cryptocurrency sector in 2021. Roughly three months into the year, we’ve already witnessed a considerable Bitcoin bull run to roughly $60,000, as well as a surge of interest in NFT marketplaces such as Rarible and OpenSea. Moreover, 2021 has also seen the emergence of the Binance Smart Chain and a surge of interest in both BSC DeFi and BEP-20 tokens. This was largely precipitated by a massive increase in Ethereum gas fees. Enroll in Ivan on Tech Academy to understand all the latest crypto developments!

Ethereum Network upgrades often package different so-called ”Ethereum Improvement Proposals”, or EIPs. To put it simply, Ethereum Improvement Proposals express e.g. standards for core Ethereum protocol specifications, contract standards, and client APIs. Anyone can suggest EIPs, and the community then decides on whether to adopt them. The upcoming pair of Ethereum Network upgrades take the form of hard forks, and they’ve gotten their names from the cities in which the Ethereum ”Devcon” developer conference took place. As such, the upcoming hard forks were named after Devcon0 in Berlin and Devcon1 in London, respectively.

What is the Ethereum Berlin Hard Fork?

Today, however, Ethereum’s ModExp compiler is comparatively expensive, and EIP-2565 aims to make ModExp more usable in practice. EIP-2565 will attempt to do this by lowering gas prices for ModExp, and achieving strong randomness and security with e.g. VDFs (verifiable delay functions). Essentially, EIP-2565 will promote the use of a broader range of cryptographic operations for Ethereum smart contracts.

This Ethereum Improvement Proposal, which is co-authored by Vitalik Buterin and Martin Swende,  also relates to gas prices much like EIP-2565. However, unlike how EIP-2565 lowers ModExp gas prices, EIP-2929 will instead increase certain gas costs. Specifically, operations (or ”opcodes”) that access memory have traditionally been cheap and have been involved in DoS attacks.

Although gas prices for opcodes have already been raised before, this has not sufficiently discouraged from these DoS attacks. The problem behind this is, according to EIP-2929, that it is still comparatively cheap for hackers to force all nodes to partake in this type of attack. EIP-2929 will increase the cost of state access opcodes roughly threefold, hopefully closing this vulnerability.

The fourth and final EIP included in the Berlin hard fork is EIP-2930. According to the EIP’s ”simple summary”, EIP-2930 ”[a]dds a transaction type which contains an access list, a list of addresses and storage keys that the transaction plans to access. Accesses outside the list are possible but become more expensive”.

As such, this EIP will enable a new type of transaction where accessing inside the access list is cheaper. This new transaction type builds on EIP-2718 and introduces an asset list format to Ethereum. Furthermore, EIP-2930 also reduces risks of contract breakage otherwise introduced with EIP-2929.

What is the Ethereum London Hard Fork?

The Ethereum London Hard Fork, which is the next major hard fork following the Berlin hard fork, is set to go live ”around” July. Although this timeline could still change, signing the London hard fork in July of 2021 would mean that the testnets need to fork in June. What’s more, the fork needs to be essentially set in May, and the EIPs chosen for the Ethereum London Hard Fork will need to be tested and implemented during March and April of 2021.

Without a doubt, EIP-1559 is one of the most hotly debated Ethereum Improvement Proposals in recent history. We’ve previously covered this improvement proposal and whether or not this will make Ethereum deflationary. According to EIP-1559’s simple summary, EIP-1559 will contain a ”transaction pricing mechanism” that involves a fixed network fee which is burned, and which dynamically increases or reduces block sizes in order to combat network congestion.

You can read more about EIP-1559 in our dedicated article on the subject, but essentially, EIP-1559 could overhaul the user experience for gas management on Ethereum and introduce a ”BASEFEE” that depends on the current level of Ethereum network congestion. As such, the exorbitant Ethereum gas fees recently seen could be alleviated.

Seeing as this mechanism increases the mining difficulty exponentially over time, it will eventually lead to something known as the ”Ethereum Ice Age”. This is when the Ethereum chain becomes so hard to mine that it becomes unattractive for miners to do so. In extension, the Ethereum Difficulty Bomb will likely encourage the switch to Ethereum 2.0. However, EIP-3238 delays the Ethereum difficulty bomb so that 30 second block times won’t occur until sometime around mid-2022.

What is the Ethereum Shanghai Hard Fork?

So, what’s next after the Ethereum London Hard Fork? Although this is still in the future and will likely come during the fall of 2021, there has been some talk about the next hard fork. Logic dictates that this next Ethereum Network upgrade should be called the ”Ethereum Shanghai Hard Fork”, named after Devcon2 which took place in Shanghai back in 2016. Although nothing is set in stone yet, the Ethereum Shanghai fork has been tentatively scheduled for October 2021.

Interestingly, some have speculated that this hard fork might not focus as much on features in the same way that the Berlin and London fork will. Instead, the Shanghai fork might revolve around the Ethereum 2.0 merge. However, this is still seemingly undecided, with some – most notably Ethereum Protocol Support expert Tim Beiko – arguing that the Shanghai fork will also be another ”regular” hard fork with more typical EIP features.

It remains to be seen whether the Ethereum Shanghai Hard Fork focuses on merging Ethereum and Ethereum 2.0. If it does, this will undoubtedly be one of the most important steps yet towards realizing the vision of Ethereum 2.0 Serenity. However, if that doesn’t come to pass, there is always the possibility of an Ethereum Cancún Hard Fork, named after Devcon3 in Cancún during 2017. Until then, however, the Berlin and London forks will likely bring enough news and debate to keep the Ethereum community occupied for some time going forward.

Written by IvanOnTech
April 10, 2021
Ivan is an international speaker, educator, developer and data scientists. Ivan’s YouTube channel Ivan on Tech has become an international phenomenon, spreading blockchain knowledge all over the world and accumulating over 450,000 subscribers.