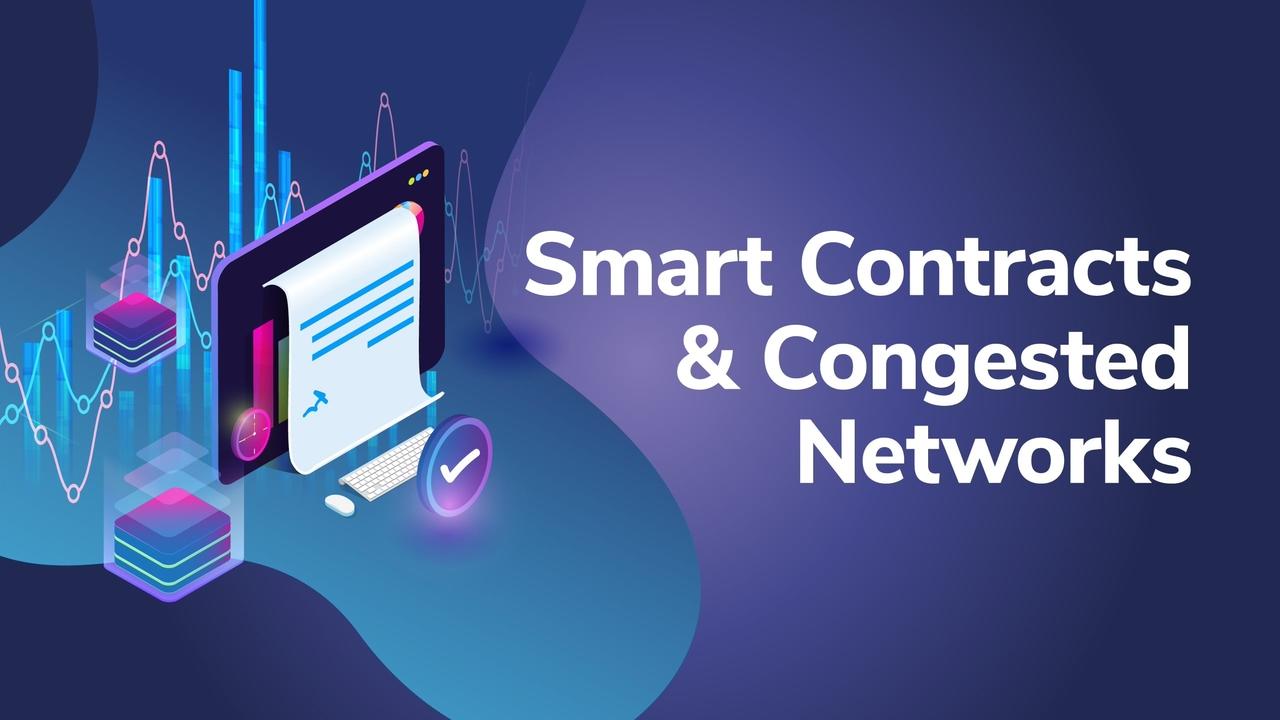 As Ethereum is the biggest smart contract platform it is, perhaps, the most well-known network to experience the problems of a congested network. To run an application on the Ethereum blockchain, a dApp user needs to pay gas. Essentially, since there is not enough gas to drive the demand for DeFi and dApps, the price has skyrocketed. In this article, we are going to clarify the problem and explore some of the potential solutions to this problem.

Looking to learn more about smart contracts before diving deeper into congested networks? If so, you should check out Ivan on Tech Academy’s course on Ethereum 101 and Ethereum Smart Contract Programming. What are you waiting for?

The first step in understanding why the network is overcrowded and why this creates a major problem is to understand Ethereum as a smart contract platform. Smart contracts are essentially code that self-execute once specific conditions are fulfilled. A smart contract is, therefore, a program on a blockchain that is an accumulation of data and code. In this case, that is the Ethereum blockchain.

On the Ethereum network, a smart contract is actually an account. The reason for this is because the contract can receive and transfer money along with having a balance. However, this account is not run by a user but is instead run by the code that the contract contains. Furthermore, users on the network can then interact with the smart contract accounts. The code is then executed, automatically enforcing the terms of the agreement.

Smart contracts provide users with the same functionality as regular contracts. However, the difference is that the code enforces the terms instead of a middle man, and without having to rely on an intermediary. This means that smart contracts can help businesses save a vast amount of money.

Most industries can benefit from smart contracts since it can automate a lot of functionality and cut out intermediaries. Maybe the most obvious industry is the financial sector, where DeFi is growing at a rapid rate. However, smart contracts can be applied to other areas such as healthcare. Within the healthcare industry, smart contracts can help with storing information like medical records.

For any program such as a smart contract to function on the Ethereum blockchain, it requires something known as gas. The gas measures the amount of computing power that a program uses. In order to use this power, the user of a contract needs to pay a fee depending on the gas spent.

An appropriate analogy is to look at a program on the Ethereum network as a car. The car needs gas to function correctly, and so does a smart contract. If the program does not receive sufficient fuel for the amount of computing power that it uses, the program will stop moving forward.

Along with measuring the amount of computing power that a contract needs and making sure that that program is functioning, gas has another important task. Gas also helps the Ethereum network to be more safe and secure. Since the network requires a fee for any program deployed, it prevents users from spamming the system. Each of the transactions on the network, therefore, requires a limit on how many computations can be made. This limit, in turn, prevents contentious computational wastage and infinity loops.

As the gas is used as payment for the usage of a contract, the same gas is also used as payment for the people supplying computational power. This also means that gas is a form of incentive that attracts users of the network to confirm and mine blocks in the chain. The miners are, therefore, supplying their computational power to validate smart contracts in the system.

Some of the most popular smart contracts on the Ethereum blockchain are the decentralized exchange Uniswap and stablecoin USDT. These two programs require a lot of gas. Since these platforms or programs are popular, the users must pay a high fee to make sure that their transactions are executed faster.

The drastic increase in prices is causing problems for smaller players since they can not afford to utilize contracts. This goes against one of the most fundamental ideas of DeFi, which is that no one is excluded. Too high prices mean that not everyone can participate in the system, and this is a major problem.

The situation is not going to solve itself as more users are entering the system at the same time as more complex contracts are being deployed. These two factors are what is contributing to the congested smart contract networks like Ethereum now are experiencing. So, what can be done to solve this problem?

Whenever a business is operating in a free market and the demand exceeded the supply, there are a few scenarios that can occur. Two of the most likely scenarios are (1) that competitors develop to solve the rest of the supply, or (2) that the existing organization develops to fill the void.

In the case of the congested network that is currently occurring regarding Ethereum, both these scenarios are currently playing out. There has been a development of new platforms that also supply the opportunity for smart contracts, and we have seen a development from Ethereum’s point of view. So, let’s go through a few of the effects of congested smart contract networks.

There are several big platforms available on the market that allow users to develop smart contracts. Two of the biggest are RSK and EOS, and we are going to take a closer look at how they work and what they are doing differently from Ethereum.

The RKS virtual machine allows the application of smart contracts developed in Solidity (the programming language used for Ethereum development) to be applied to the Bitcoin system. RSK, therefore, brings together the best of two worlds, the functionality of Ethereum and the security of the Bitcoin blockchain.

One great functionality that RSK offers is that it allows crossing ERC20 tokens between the networks. This function is called a Token Bridge, and it lets users basically take advantage of lower fees and more secure networks and they can choose when to utilize this function. This works since the bridge’s smart contract locks the original tokens on the original chain. Then the bridge creates an event and sends it to the bridge on the other chain. Once a majority of the federates have voted, the bridge will emit ERC777 tokens on the new chain for the same amount as the tokens locked in the original chain. The newly emitted tokens are then compatible with ERC20 tokens allowing for the same, plus even more, functionality.

So, due to the increase in demand on the Ethereum blockchain the prices there are way higher than the prices on RSK. This means that people can leverage this advantage and use the transaction fees from RSK, meanwhile drawing from the advantages of the Ethereum network.

The tokens are an important part of the systems since holding on or locking in the tokens makes the holder eligible to use the resources of the network. Holding or staking the tokens also allow the holder to rent out their bandwidth to other developers on the platform.

However, staking does not automatically mean that you can create smart contracts on the network. Along with this, the user also needs to purchase RAM, a resource that is required for development in the EOS system. RAM provides the function to store an in-memory database that makes smart contracts possible on the network.

The internal RAM system holds the supply of RAM at a steady level. The price is set by the system and is based on the availability of the RAM supply. According to the EOS Resource Planner, RAM will go for around $0.154 per KiB.

To solve some of the problems with a congested network, Ethereum decided to develop its platform and introduce Eth2, or Ethereum 2.0 and proof-of-stake. This is an upgrade to the blockchain which allows for more speed, scalability, and efficiency. These characteristics will most likely contribute to solving the congestion problem.

One of the biggest differences between Ethereum 1.0 and Ethereum 2.0 is that they move from a proof of work (PoW) to a proof of stake (PoS) consensus mechanism. For the PoW consensus mechanism, miners need to solve a complicated mathematical problem and verify the transaction. The first miner that manages to solve the problem will then receive the PoW. As a reward for this process, the miner then receives a reward in the form of cryptocurrency.

However, PoW processes require a vast amount of energy and are, therefore, inefficient. Instead, PoS has been developed to combat this problem. In this system, the validator is selected based on how much the user stakes and for how long they have staked their coins. The biggest benefit is that it is much more energy-efficient and that not as much computing power is needed to validate a block.

The congested network is a problem that can hinder the development of the crypto industry and decentralized applications. Luckily there are smart people out there working on different solutions to this problem.