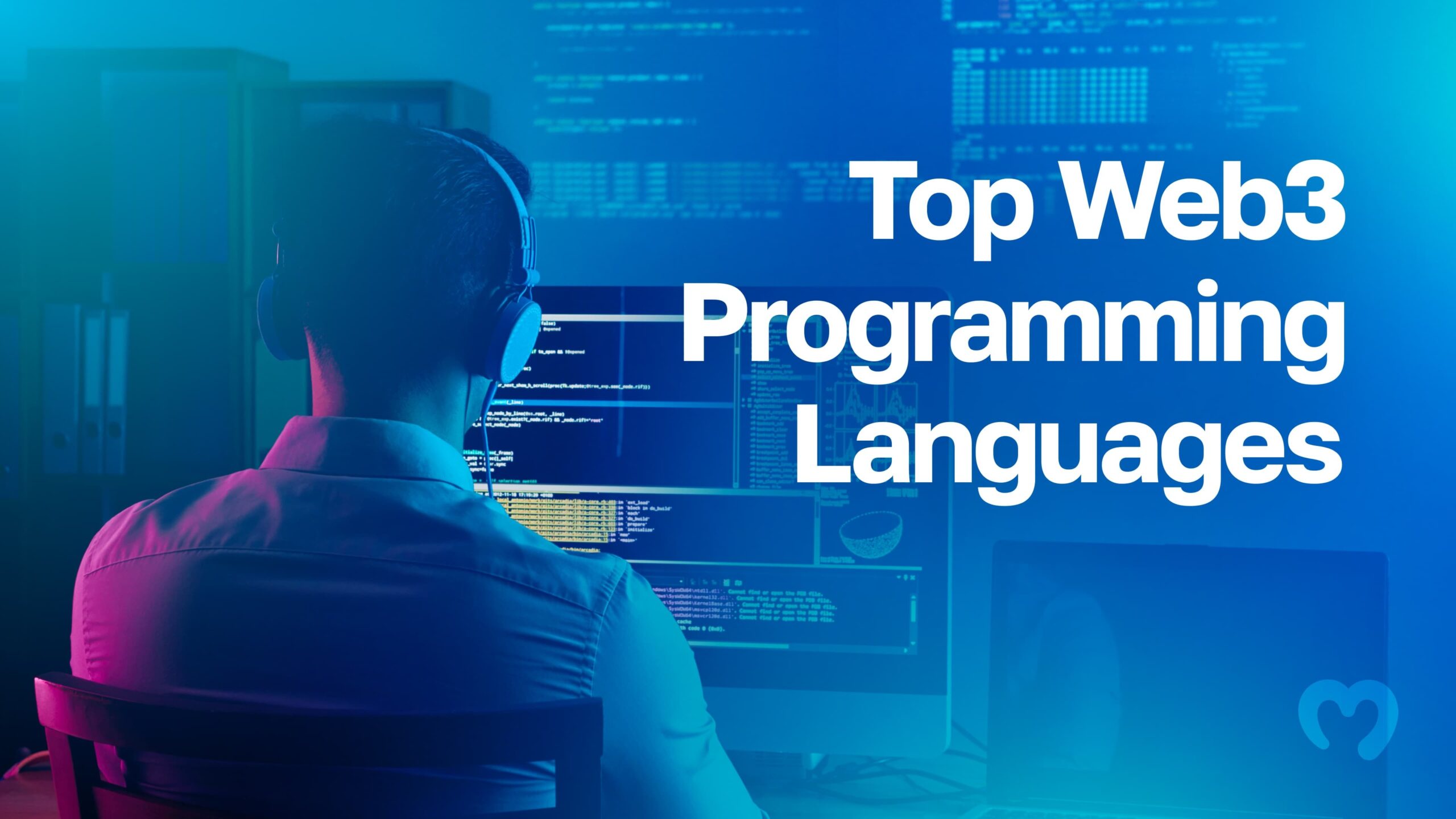 If you want to build dapps or create smart contracts on Ethereum, you will likely use Solidity. To learn about the fundamentals of creating smart contracts on Ethereum, check out the Ethereum Smart Contract Programming 101 course at Moralis Academy. This course teaches students about token standards, Ethereum Virtual Machine (EVM), non-fungible tokens (NFTs), etc. Plus, this course is a great foundation for broader Web3 development. Take your programming game to the next level with Moralis Academy!

Many developers are surprised to learn that Java is one of the most popular blockchain programming languages. However, it is the chosen language for a number of prominent blockchain networks. This includes NEM, IOTA, NEO, and Hyperledger Fabric.

JavaScript is one of the most widely used programming languages for creating interactive web pages. It is a text-based language that operates as a third layer on top of HTML and CSS (Cascading Style Sheets). Also, JavaScript allows developers to create content that updates dynamically.

Also, JavaScript is one of the most versatile Web3 programming languages. Learning JavaScript will lay the foundations for learning other top programming languages. If you want to learn Web3 development but have no coding experience, be sure to check out the JavaScript Programming for Blockchain Developers course at Moralis Academy. In this course, we teach students how to build a decentralized exchange (DEX) from scratch on Ethereum. Take your first steps towards a life-changing career in Web3 with Moralis Academy!

C++ is not only one of the top blockchain programming languages, but it is also a staple throughout the tech world. It gives developers primitive control over memory and allows them to move semantics. Also, C++ features advanced multi-threading and a range of object-oriented features. Plus, it allows Web3 developers to combine data and functions into one module.

The C++ language features a broad range of development tools and libraries. However, C++ is considered to be more difficult to learn than other blockchain programming languages such as Python, JavaScript, or Solidity. Despite this, many developers enjoy using C++ because it gives them complete control over the CPU and memory usage.

HyperText Markup Language, or HTML, is a standard markup language that allows developers to structure web content. Many developers cite HTML as being the first layer of Web2. It is an essential programming language for defining headings and paragraphs. Plus, HTML is often used for embedding videos and images on web pages.

HTML is a standard language displaying documents in web browsers. Used in conjunction with CSS and JavaScript, HTML is at the core of a significant portion of all web development. In addition, HTML is among the most popular blockchain programming languages. This is because it provides the foundations of a significant number of websites.

Python is an interpreted language. This creates some issues when developing advanced cryptographic operations for blockchains. However, Python makes up for this by managing numerous performance-related overheads. In addition, Python developers have access to an extensive range of libraries and plugins. Plus, the language is easy to learn and allows developers to build their ideas quickly.

Rust removes friction from problem-solving and lowers the barrier to entry for blockchain developers. Also, Rust allows developers to achieve more in less time. Accordingly, Rust has become an essential tool for creating decentralized applications (dapps) on Solana. Solana is one of the fastest blockchain networks in existence. Plus, it allows developers to create and deploy smart contracts quickly, with minimal costs. If you want to learn how to create dapps on Solana, check out the Rust and Solana Programming 101 course at Moralis Academy. This course requires no prior knowledge and is the ideal primer for learning how to program smart contracts on Solana using Rust.

Some of the biggest companies use Go to build scalable applications with minimal friction. This includes Netflix, American Express, Uber, and PayPal. Furthermore, the Go programming language makes it easy to create sleek, efficient command-line interfaces for a variety of novel applications.

Ruby is a dynamic, open-source, general-purpose, and object-oriented scripting language. Designed in the mid-90s by Yukihiro Matsumoto, Ruby aims to facilitate productivity via simplicity. Also, Ruby is “natural to read and easy to write” and supports an extensive range of programming paradigms.

Because Ruby is a scripting language, it doesn’t talk with hardware directly. Instead, developers write a text file which is then parsed and turned into code. However, Ruby uses object-oriented programming to increase the amount of reusable code available to developers and increase efficiency.

Vyper is a Solidity alternative that takes inspiration from Python. It has a similar syntax to Python but with fewer features. Like Solidity, it allows developers to interact with Ethereum Virtual Machine (EVM). However, Vyper handles security and control structuring in a much different way than Solidity.

Vyper was designed to minimize the perceived security flaws associated with Solidity. This includes those presented by functionalities such as infinite loops, modifiers, and recursive calling. If you’re an Ethereum smart contract developer and want to try something new, perhaps consider giving Vyper a try!

Becoming a Web3 developer opens up all sorts of career development and social change opportunities. Also, understanding what the future of technology and finance might look like will help you prepare for a better future. Moreover, Web3 is creating an equitable, democratic version of the internet that rewards contributors for creating censorship-resistant applications and token economies.

By breaking down the concentration of power that lies in the hands of a small group of tech giants, Web3 developers are at the forefront of a new paradigm of online experiences. Examples of Web3 applications include those focusing on social media, advertising, web browsers, finance, data storage, and metaverse applications. Furthermore, blockchain and Web3 are helping to lower the barrier to entry for financial services and facilitating transparency and efficiency sector-wide.

Web2 applications are notorious for harvesting data and imposing on our online privacy. However, Web3 addresses this issue by creating an ecosystem of privacy-preserving blockchain applications that put users in control of their own online experiences. Also, if you’re a business owner, learning Web3 programming languages could help you expand your product range and optimize business operations.

Blockchain is becoming increasingly prominent in a variety of sectors. In the future, we can expect Web3 technologies to play a crucial role in our daily online interactions. Accordingly, learning how to use the top blockchain programming languages will prepare any developer for the new frontier of web programming.

For example, if you want to build smart contracts, you might look at Solidity or Vyper. However, if you’re looking for general-purpose Web3 programming languages, you might look at something like Python, JavaScript, or C++. You may also find a lot of crossover between languages. While there are stark differences between some, many languages share common principles and features.

If you want to put your Web3 programming skills to practice, check out Moralis Projects for a range of free Web3 builds. Here, we show you how to create decentralized alternatives to some of the most popular Web2 applications. In addition, you can find a number of free decentralized clone builds on the Moralis YouTube channel. Also, don’t forget to follow us on Twitter @MoralisAcademy! We’d love to hear your thoughts on the top Web3 programming languages. Let us know if we missed any!

If you want to save time during your Web3 development process, check out the Moralis SDK (software development kit). This provides various code snippets to help optimize your development process. Moreover, Moralis removes most of the backend legwork so that you have more time to focus on creating a beautiful user experience.